The recent news concerning Singapore's City Harvest Church's (CHC) acquisition of Suntec Singapore International Convention and Exhibition Centre exposes weaknesses in Singapore's regulatory framework managing charitable and religious organisations.
The Suntec Expo Centre is an established feature in the international convention circuit. In the current month, there are almost twenty international exhibitions scheduled at Suntec.
Suntec is a Singapore landmark, not just as a shopping mall but also as an exhibition centre. 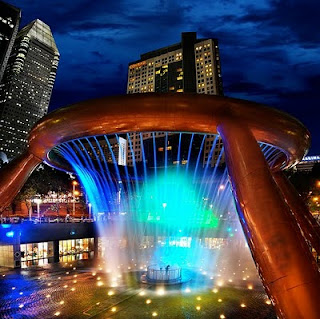 The Fountain of Wealth at Suntec, Singapore

The CHC, too, is a fixture within Singapore. With its 33,000 members, the CHC is a powerful force for Christianity in Singapore.
In the last two years alone, CHC received 86 million Singapore Dollars in donations. In the financial year 2008 – 2009, CHC paid SGD 9.3 million in staff salaries and allowances versus 'Local Community and Charity Work' of SGD 2.9 million. Total balance sheet size was SGD 111.1 million with net liabilities of SGD 7.6 million.
Put simply, CHC is rich. Even after debts, CHC owns assets of over SGD 100 million. Acting as an obvious multiplier effect to the large membership is the financial strength and ongoing donations collected by the CHC.
In March 2010 the public became aware of CHC's plans to convert Suntec into its new home.
A church is not just a main sanctuary and nothing else. Having extra facilities is critical to the operations of the church. We need areas for children, rooms for Bible study, car park space and eating places. Suntec Convention Centre has more than 30 meeting rooms, and we will have access to over 8,680 car park lots in the Suntec-Marina area. Between Suntec City and the Convention Centre, there are 283 stalls/restaurants for our members to eat at, and 622 retail stores for our members to shop in.
Clearly, the acquisition of Suntec was a 'takeover' of the premises. One would assume that CHC had comprehensive plans to modify and 'rework' Suntec to ensure its suitability for the events envisaged by CHC.
Ordinary Singaporeans are right to be sceptical of the transaction.
While the authorities have subsequently confirmed that a rezoning of Suntec from commercial to religious use has not been requested by the new owners, questions about CHC intent are genuine.
Imagine a wealthy religious Arab trust fund buying Chijmes and converting it into a religious centre, complete with madressa and mosque with courtyard. CHC's intent and plan for Suntec is no different.
From an investment perspective, CHC tax exempt status gives it an undue advantage. All revenue is tax free. Hence, CHC required returns are lower than for ordinary corporate and individual businesses.
CHC's acquisition distorts returns in the real estate market as tax exempt entities are willing to pay higher prices for assets than typical taxable investors. In a free market, a level and transparent playing field for investors is the primary role of the authorities.
In the Suntec transaction, there is no transparency and questions about the fairness of the purchase abound.
On a social level, one has to be suspicious about commercially managed religious organisations encroaching upon Singapore's common space. Combining large amounts of cash with thousands of fervent believers is a recipe for increasing social cleavages in a diverse society. 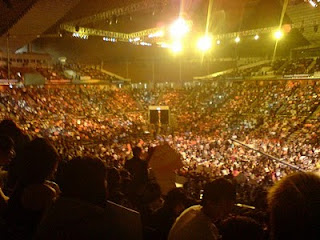 In 2008 – 2009, CHC spent approximately SGD three million on 'Christian Television Broadcast and Mass Media, Church Television Ministry and Internet Broadcasting;' an amount equivalent to the SGD 2.9 million spent on social work.
Undoubtedly, all charities, including religious and ideologically inclined organisations, have a legitimate need to become self-sustaining entities. However, naked capitalism must be subordinated to the broader interests of society.
A comprehensive regulatory framework, possibly restricting charitable investors from taking management stakes in other businesses, is an immediate requirement. Like all religious organisations legally operating in Singapore, the activities of Kong Hee's Church must be circumscribed in a reasonable manner.

Imran is a business and management consultant. Through his work at Deodar Advisors, Imran improves the profitability of small and medium sized businesses. He can be reached at imran@deodaradvisors.com.
Posted by Imran Ahmed at 02:55