Pakistan existed neither as a concept nor a nation-state until the 1940s. Singapore, on the contrary, has been a flourishing port city with a diverse population for many centuries.
It is easy to point to the impact of Chinese, Malays and Indians on Singapore's history. That Mandarin, Malay and Tamil, along with English, are Singapore's official languages is testament to that fact. However, within these larger groups there are 'subdivisions' which too have added to the rich flavours of modern Singapore.
The initial impact of 'Pakistanis' on 1900s Singapore occurred primarily through the British Indian army. Soldiering seems to come naturally to many Muslims from Northwest India, today's Pakistan.
﻿﻿Among the military contingents located in Singapore at the time was the Fifth Light Infantry Regiment. The Fifth Light Infantry Regiment contained mainly Muslim soldiers from Punjab and the Northwest Frontier Province. These same two provinces, Punjab and Khyber Pakhtunkhwa (the Northwest Frontier province) provide the bulk of the troops and officers for present day Pakistan's military.
The regiment arrived in Singapore in October 1914, in the midst of Europe's first 'world' war. The 1914-18 war saw the Ottoman Empire, the precursor to modern Turkey, side with Germany against the British. Until its disbandment in 1924, the Sultan of the Ottoman Empire had for many centuries also held the title of Islam's Caliph. The Caliph is the spiritual and moral leader of all Muslims.
Consequently, when soldiers of the Fifth Light Infantry fell prey to rumours that the regiment was being shipped to Europe to fight against the Sultan's (Caliph's) troops, half of the regiment's troops mutinied against the British. The other half of the regiment scattered across the island. Eight hundred mutineers roamed the island looking for British targets. Order was not fully restored for approximately ten days.
In the aftermath of the 1915 Mutiny, colonial authorities passed the 'Reserve Force and Civil Guard Ordinance' imposing compulsory military training for all male subjects aged between 18–55; Singapore's first experience with National Service. ﻿﻿﻿﻿﻿
﻿﻿﻿Additionally, British administrators required all Indians in Singapore to register themselves with the authorities. The registration requirement did not sit well with most Indians, who had little to do with the mutineers or their cause.

Singaporean academics tend to couch the 1915 Mutiny in the context of Muslim soldiers unwilling to fight other Muslims. History refutes this argument.
Muslims routinely fought for the British (and other colonial powers) against other Muslims, e.g. Afghanistan. At times, Indian Muslim soldiers even fought against troops loyal to the Mughal Empire. The fact that Malay Muslim soldiers under the command of the Sultan of Johor assisted British colonial authorities in capturing mutineers from the Fifth Light Infantry regiment also puts paid to the 'pan-Islamist' argument.
Whatever one's views on pan-Islamism, one fact is clear: Pakistanis have been making waves in Singapore for almost a century now!
__________________
Imran is a business and management consultant. Through his work at Deodar Advisors, Imran improves the profitability of small and medium sized businesses operating in Singapore and the region. He can be reached at imran@deodaradvisors.com.
Posted by Imran Ahmed at 21:01 No comments:

Some years ago the Singapore government announced its decision to permit casinos in the hitherto straitlaced city-state. It was time to reinvent Singapore.   The government was searching for new ways to keep economic growth chugging along at the high rates Singaporeans took for granted.
At the time, it seemed that I was a minority voice opposed to the introduction of legalized gambling in our own backyard. My argument against casinos was not a moral one. If people wish to gamble that is their choice. Even without the casinos there were enough opportunities for Singaporeans to gamble away their wealth.
I felt that Singapore's brand image as a clean, friendly, though fun, place to live would be irreparably diluted.
Surely, the pros and cons of Singapore's casinos are contentious. Different analysts will reach opposing conclusion. However, the case against legalizing casinos in Singapore is supported by several recent developments. 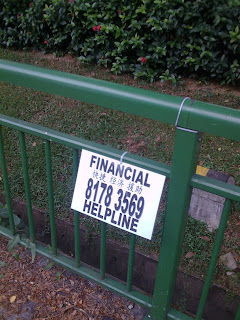 Loan sharking activity has reached epidemic proportions. Moreover, based on anecdotal evidence, money lending (legal or otherwise) must be one of Singapore's fastest growing industries. Many observers cite circumstantial evidence linking gambling to increased prostitution, theft and other petty crimes.
Surely, the casinos have also had a positive impact on economic growth and real estate prices. Ask any real estate agent. Certainly, the average Singaporean real-estate punter had a field day deciding which locations would benefit most from the integrated resorts (aka casinos). However, the casinos' impact on Singapore's economic growth is hard to isolate from broader trends within the economy.
However, Singapore cannot rewrite history. The decision has been made and Singapore must move forward. Singaporeans must live with the consequences of having casinos within its borders.
One discussion point from the casino experience pertains to the process through which Singapore resolves potentially divisive national issues in the future.
Democratic governments, including Singapore's, derive political legitimacy through the electoral process. Legally, the Singapore government is empowered through successive parliamentary elections to make difficult decisions on behalf of the population. The government has used these same powers to create a modern, vibrant and thriving republic.
However, these last few years have seen a sea change in Singapore's political atmosphere. Citizens are clamouring for a greater voice in their future. In turn, the government is actively seeking ways to increase engagement with the population.
One solution for resolving issues of national importance is devolving decision making powers to citizens through National Referendums.
A referendum is a direct vote in which an entire electorate is asked to either accept or reject a particular proposal. Particularly for smaller nations, referendums are a useful tool to generate public debate with a view to achieving a decision all citizens can respect.
Switzerland, a role model for Singapore in so many ways, places great emphasis on referendums. Referendums are an important part of Swiss political life. In Switzerland, referendums may be forced upon the nation by popular consensus and referendum results are legally binding upon the government.
For Singapore's educated and increasingly politicized population, the National Referendum is an attractive option. It is an idea whose time has arrived in Singapore.
__________________
Imran is a business and management consultant. Through his work at Deodar Advisors, Imran improves the profitability of small and medium sized businesses. He can be reached at imran@deodaradvisors.com.
Posted by Imran Ahmed at 01:21 No comments:

Several different currents flow through today's Singapore. Some of these must be cause for consternation to policymakers. They ebb and flow at a differing pace but all combine to form a torrent as ordinary citizens vent frustration at the government.
Ensuring Singapore's economic competitiveness is one of the most vexing issues for policymakers, especially in light of increasing costs. Some analysts believe travel to Singapore has suffered lately due to the city's high cost structure. Surely, some of the higher costs are due to the appreciation of the Singapore Dollar (SGD) versus the US Dollar (USD).
Increasing the value of the SGD is an explicit tool in the government's fight against inflation.
There is more than a kernel of truth in the idea that Singapore is becoming an increasingly expensive city. According to Mercer's Worldwide Cost of Living Survey conducted in March 2011, Singapore joined the top ten most expensive cities of the world for the first time in the country's history. In 2010, Singapore ranked eleventh.
Undoubtedly, enlisting in the ranks of the world's most expensive cities is not in itself cause for concern. That is, as long as the Republic's economic activity continues to move up the value chain, i.e. towards sophisticated manufacturing, research and technology, etc.
However, if placed in the context of Singapore's regional competitors then Singapore's soaring cost base is reason to worry.
Singapore has prided itself on being a more cost-effective business environment than Hong Kong. In 2011, again according to the Mercer survey, Hong Kong became a cheaper city than Singapore. The change is significant.

Additionally, none of Singapore's Southeast Asian regional competitors made it into the top 50 list of most expensive global cities. Kuala Lumpur, Bangkok and Jakarta are all absent.
Of course, there is more to evaluating a business environment than simply the cost of living, that too for expatriates. Issues such as quality of life, taxation, legal system, size of domestic market and regional connectivity all must be considered.

Clearly, Singapore has competitive strengths in several of these other factors. To date, few businesspersons have abandoned Singapore for Melbourne solely on the basis of Melbourne ranking number twenty-one in the Mercer cost of living index.
Singapore's test lies in reducing costs without affecting earnings growth for its residents. Arguably, the short term answer is cutting taxation. Longer term, focusing on developing clusters of value added industries might prove to be the answer.
The government's focus on establishing Singapore as a medical and life sciences research and development hub seem to be having some success. Singapore's emphasis on positioning itself as a broader knowledge / education hub feeds into this effort. If successful, these types of initiatives will catalyze the city-state into creating higher paid, value added jobs.
Short term, cutting taxes may be economically difficult in an atmosphere where populist pressure to increase expenditure on social welfare programs is rampant. However, given Singapore's historically prudent fiscal management and high level of reserves the taxation option deserves greater study. 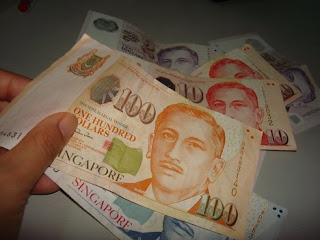 Decades of painstaking efforts resulted in Singapore transforming itself as Southeast Asia's commercial hub. It is naive to believe Singapore's relevance as a regional hub will disappear anytime soon. However, policymakers are faced with difficult choices ahead.
Singapore's financial managers must ensure the city's higher cost of living does not eclipse other positive factors (e.g. transparency, low taxation, English speaking). Regional cities like Kuala Lumpur, Bangkok and even Jakarta are attractive options in their own way. During the last decade, the trio has improved their physical infrastructure. Moreover, these cities have the added advantage of large domestic markets. Singapore must quickly adapt to the newer, more sophisticated regional environment if it is to retain its appeal as a regional business center.
__________________
Imran is a business and management consultant. Through his work at Deodar Advisors, Imran improves the profitability of small and medium sized businesses. He can be reached at imran@deodaradvisors.com.
Posted by Imran Ahmed at 21:15 2 comments: