Having lived in Singapore for almost twenty years and as a licensed Singapore Tour Guide I know Singapore well. Academically and ‘in theory’ at least.

However, since I did not grow up in Singapore I don’t have the shared experiences of many Singaporeans of my age. I did not listen to stories from my parents about the ‘Konfrontasi’ period between Malaya – of which Singapore was then a part – and Sukarno’s Indonesia. I also did not grow up in a Singapore dotted with kampongs and wooden shacks. (HDB apartments became the order of the day by the late 1970s.) 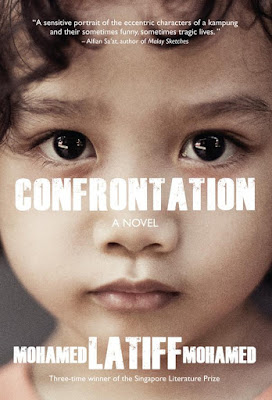 For such experiences I turn to literature. There may not be a lot of it around as most Singaporeans were busy making ends meet – not much free time and hardly any disposable income. Hence, Mohamed Latiff’s book Confrontation – originally written in Malay - helps to fill some ‘memory’ gaps for me.

The story revolves around a kampong boy and his life in a mixed Chinese – Malay kampong in the 1960s. Political consciousness, the communist movement and Malay Nationalism are some of the undercurrents which flow through the book.

Nonetheless, the book has a human face to it. There are multiple (believable) characters all of whom go through the joys and sorrows of life like the rest of us. (No superheroes in this novel.) The characters make the novel worthwhile even for those not interested in Singapore’s history and social conditions during the 1960s ‘Merdeka Period.’ For those wishing to understand Singapore’s social milieu as seen from a Malay perspective Latiff’s novel Confrontation is a must.
__________________
Imran is a Singapore based Tour Guide with a special interest in arts and history. Imran has lived and worked in several countries during his past career as an international banker. He enjoys traveling, especially by train, as a way to feed his curiosity about the world and nurture his interest in photography. He is available on twitter (@grandmoofti); Instagram (@imranahmedsg) and can be contacted at imran.ahmed.sg@gmail.com.
Posted by Imran Ahmed at 17:02 No comments: