The Peculiar Life of a Lonely Postman by Denis Theriault: a book review


It has been a long time since I have read an entire novel from start to end in one sitting. A few days ago I did exactly that with Theriault’s book, The Peculiar Life of a Lonely Postman.

That fact in itself makes several statements about the book. 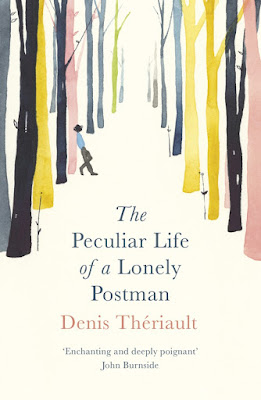 Firstly, it’s an intriguing book that keeps the reader engrossed. Secondly, at 137 pages it’s not a long work. Above all, the author’s curious blend of language with a ‘realist fantasy’ story composed about a seemingly boring, everyday character makes Theriault’s novel difficult to put down.

The plot concerns an introverted postman – Bilodo - who becomes a voyeur of sorts by reading others personal letters. During this process he comes across regular correspondence between a man and a woman done entirely in haiku, a Japanese form of poetry. He becomes so immersed in this vicarious relationship that it takes over his life, much like alcohol takes over an alcoholic’s life.

The postman himself is a sad, forlorn character. The reader empathizes with him more and more as the story develops. Bilodo’s desire for ideal love; his social awkwardness and even the way he finds himself metamorphosizing into another character all make the reader feel for him.

The author’s language is poetic, simple yet descriptive. It evokes emotions of calmness and being in the moment. The words flow like a long poem, reminiscent of reading The Four Quartets by TS Elliot during my student days.

This is a book which can be read at various levels. It has a Kafkaesque feel to it. The book is reality and fantasy set in our contemporary wired society. The ‘unreal’ bits make a social statement. The novel will surely make it into university literature curriculums in the coming years.

The Peculiar Life of a Lonely Postman is a book which will resonate with a wide range of audiences. It has philosophical undertones and yet its greatest appeal lies in its simplicity. It is an elegant book deserving of much more than the few hours required to complete it.
__________________
Imran is a Singapore based Tour Guide with a special interest in arts and history. Imran has lived and worked in several countries during his past career as an international banker. He enjoys traveling, especially by train, as a way to feed his curiosity about the world and nurture his interest in photography. He is available on twitter (@grandmoofti); Instagram (@imranahmedsg) and can be contacted at imran.ahmed.sg@gmail.com

Secrets of State by Matthew Palmer: a book review


Secrets of State, a novel written by former US diplomat Matthew Palmer, is a sophisticated work of fiction. In his book Palmer weaves together a believable plot involving an US and Indian ‘deep state’ conspiracy to militarily destroy Pakistan. The story involves some classy character development, beginning with the main protagonist Sam Trainor. 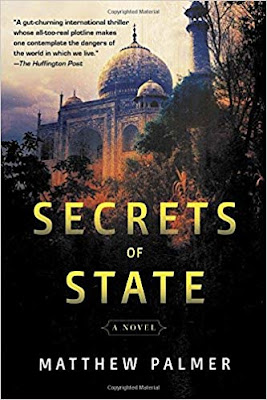 The plot has ultra-nationalist patriots in the US and Indian collaborate to launch a (false flag?) nuclear attack on an Indian city in order to provoke an Indian military attack aimed at destroying Pakistan (once and for all). For the Americans, the motive is to ‘protect’ the world by preventing Pakistani nukes from following into the wrong hands, i.e. Islamic extremist terrorists.

Through chance, coincidence or synchronicity a retired US South Asia specialist, Sam Trainor, gets a whiff of the plot and starts investigating through his network of Washington contacts. Pretty soon Trainor finds himself in hot waters and realizes he is onto something big.

Meanwhile, his clandestine love interest – an Indian diplomat at her country’s US mission – and his daughter – a do-gooder, socially conscious, young half-Indian woman doing development work in the slums of Mumbai – both find themselves sucked into the terrorist plot.

Despite what appears to be a far-fetched series of events, Palmer does a good job piecing the story together. He even adds some historical ‘make believe’ stories from time to time to give the novel greater believability. It works.

Events in Secrets of State move quickly. The reader is kept in suspense and will hardly notice the length (437 pages) of the novel.

To be sure, the author cashed in on post 9/11 conventional wisdom which conveniently placed every international terrorist incident at Pakistan’s doorstep.[i] Nonetheless, Secrets of State is more nuanced than many post 9/11 ‘terrorist’ thrillers. Palmer’s fiction is a good addition to the genre. Anyone who enjoys a good geo-political thriller will find Secrets of State a good read.
[i] In the aftermath of 9/11, if an American in Washington DC caught the flu, it must have been a conspiracy involving biological weapons hatched in Pakistan’s governed tribal areas! Likewise, if a firecracker exploded unannounced on the streets of London it was an Islamic extremist attack planned and plotted by Pakistanis!

__________________
Imran is a Singapore based Tour Guide with a special interest in arts and history. Imran has lived and worked in several countries during his past career as an international banker. He enjoys traveling, especially by train, as a way to feed his curiosity about the world and nurture his interest in photography. He is available on twitter (@grandmoofti); Instagram (@imranahmedsg) and can be contacted at imran.ahmed.sg@gmail.com


I watched Gato Negro hoping to get an idea of post-war Argentine society. Instead, I got a blend of a period drama, thriller, crime and social piece woven into one slow moving film.

Unfortunately, the Argentine film didn’t work well in any of the genres. The Director tried doing too much and lost focus. A classic case of ‘jack of all trades and master of none.’ Yes, I did get a glimpse into Argentine society: a dry and limited glimpse without any color provided by the filmmaker though not enough to redeem the movie as an ‘intellectually stimulating foreign film!’

The story started well enough by introducing the main character, Tito, as a boy destined for something more than life in his rural village hometown. Sure enough, the film follows Tito grow into a wealthy businessman of dubious character and shady deals. (I guess that’s business in Argentina?)

Along the way he meets – and forgets – many characters. However, his hometown of Tucuman keeps nagging at him through different ways, e.g. family, former lover, etc. He just can’t seem to shake off his history with Tucuman even after becoming a wealthy international businessman.

I can’t (and won’t) say much more of the plot so as to not give away too much.
Although not a ‘screaming buy,’ Gato Negro is a good effort by director Gaston Gallo. I will keep on the lookout for more films by Gallo. He is bound to direct a gem at some stage.

Note: Gato Negro is available on Netflix as at September 2018.

Imran Khan's Pakistan Tehrik-Insaf (PTI) government's recent collapse in facing down Islamist radicals over the appointment of Pakistani Princeton University economist - who happens to be Qadiani - to a government advisory panel, is shameful.
Even more shameful is that Imran Khan did not use even one iota of his considerable political capital to support Atif Mian. There was no public statement from King Khan himself, only official comments by his minions.
Is this the Naya Pakistan for which Pakistanis voted?
Apart from the fact that the government's behavior is illegal - Pakistan's Constitution is unambiguous on the subject – it sets a dangerous precedent for the State's future.

PTI's surrender places in doubt Khan's ability to follow through with his ambitious reform program in the face of protest. Economic reform requires tough decisions and if the government is only capable or willing to implement populist policies then whence the reform?
The incident underscores  the recent disintegration of Imran Khan's principles at the altar of political expediency – following on from his decision to appoint 'lotas' (aka electables) in a hitherto principled political party.
Undoubtedly, we cannot bury the notion of Naya Pakistan until the PTI's five year term is complete. However, the PTI has not had an auspicious start and the omens don't look good, especially for women and non-Muslim minorities.
Before one gives up all hope, perhaps one can give a shout out to the otherwise activist 'Suo Moto' Chief Justice? Yes, we appreciate your efforts in building dams Mr Chief Justice but can we request you also focus on your day job and dutifully enforce Pakistan's Constitution in Atif Mian's case?
[i] No citizen otherwise qualified for appointment in the service of Pakistan shall be discriminated against in respect of any such appointment on the ground only of race, religion, caste, sex, residence or place of birth. Pakistan Constitution, Article 27 (1)
__________________
Imran is a former banker and  has lived and worked in several countries during his international banking career. He enjoys traveling, especially by train, as a way to feed his curiosity about the world and nurture his interest in photography. He is available on twitter (@grandmoofti); Instagram (@imranahmedsg) and can be contacted at imran.ahmed.sg@gmail.com
Posted by Imran Ahmed at 11:59 No comments: