The adventures of an Intrepid Immortal Explorer in Ayutthuya, Thailand!

For someone living in Singapore's pristine and orderly (and recently haze infested!) environment, the chaos, color and confusion of Bangkok is a welcome respite. Walking on broken pavements, exchanging smiles with strangers, crossing roads without waiting for the 'Green Man' and at great peril to one's life just feels wonderful!

Then there is the Thai rail system. Not the subway or overhead BTS Skytrains, but good old fashioned 1970s style trains going 'clickety-clack' as they take you - mostly at excruciatingly slow speeds - from one city to another.

Recently I boarded one such train at Bangkok's main station to take me to Ayutthuya.

Ayutthuya is a historic Siamese (Thai) city. It was the capital of the Kingdom of Ayutthuya (1351-1767). Despite almost constant warring with Burma (now known as Myanmar), the Ayutthuya Kingdom was a regional economic powerhouse. The city was home to a multitude of foreign traders, some from as far as Europe.


As the train pulled into Ayutthuya, I only had a vague idea of my action plan. I knew I must see the magnificent temples and ruins sprinkled across the city but I had no idea how to get to them. As I was alone I decided would 'improvise' as I went along: no need for any detailed Grand Master Plan!

At the Ayutthuya train station, a suburban size station with perhaps four lines running through, I paused to gather my thoughts. Luckily, there was a tourist guide map posted at the station. After taking a look at the map, I realized most of the sites were concentrated in one area of the city across the river. The map was not drawn to scale so I couldn't gauge how far the ruins were from the railway station. Nonetheless, I decided I had time and could walk the distance.

A self-guided walking tour meant I must diplomatically extricate myself from the clutches of the umpteen 'Tuk Tuk' drivers offering their services as expert guides. Their sales pitch included statements intended to create fear such as, "The temples are many kilometers away from here" and "the river is very wide, cannot cross!"

Being the Intrepid Immortal Explorer I ignored the scare tactics and decided to try my luck anyway.

I ventured out of the station – there is only one direction to exit the station. Upon leaving the station, I walked towards the area where Thai food stalls - of the usual sort found all across Thailand - were located and found myself at the mouth of a small street.

With the railway station behind me there was only one way to go: forward!

A few hundred meters and several small hotels later I came across a sign for a boat crossing across the river.

Across the river and into Ayutthaya's deserted streets

After paying my five Baht - about USD 0.15 - I boarded a small boat at a wooden jetty to cross the river. Accompanying me on the boat were a few other travelers along with some locals going about their daily business. Based on my cursory reading of the city map at the train station (I was distracted by the tuk tuk drivers harassing me) after crossing the river I must continue to head 'forward' until 'a visible sign' indicating otherwise.

So, once on the other bank of the river, I headed 'forward' hoping for a sign it was the right direction.

As the glaring Thai sun burnt a hole in the top of my head, I started doubting my initial bravado thinking, "What an idiot?! Wouldn't it have been easier (and wiser) to have hired a tuk tuk driver, see the sights and not walk around like a crazy 'farangi' in a foreign land?!" Another part of me said, "Relax. The only way to see a country is on foot. I have time. Walking is the best way to experience a foreign land. If I get lost I can always pay an extortionate fee to the next tuk tuk driver and get myself back to the Ayuttuya Railway station. Besides, no one ever got good photographs sitting in the back of a tuk tuk!"

In an age before Google Maps led pedestrians to destinations, there were pagodas! The tall structures act as landmarks for fearless travelers.

Then it happened, as if I had stolen a glance at heaven I saw the pinnacle of a stupa! After spotting the pagoda, all doubts quickly receded and the Intrepid Immortal Explorer in me was revived!

Based on my precise calculations, the stupa which was hidden behind buildings, was located up ahead (forward, forward, it's always forward!) and slightly to the left. So I walked in a slightly forward leftish direction towards the pagoda.

Success was not long in coming.

This is it? No, it couldn't be. Yes, it's ornate and historical … but, it's one temple, slightly small and certainly not as majestic as I expected in the grand, wealthy, regal capital city of Ayutthaya! 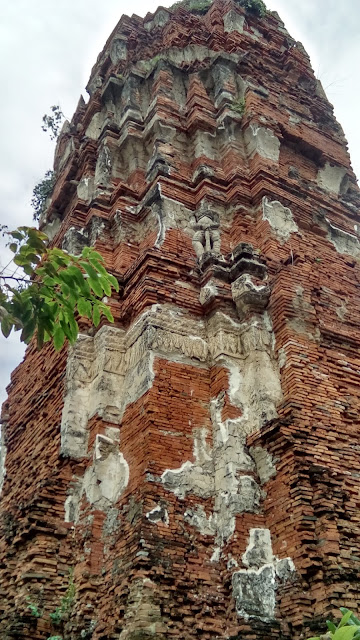 I soon realized this temple was an appetizer. It is a secondary site and not a part of Ayutthaya's major excavations. Despite the disappointment I took as many photographs as possible. After all, if I didn't find the city's major sites I should at the very least have something to show for my trip?!

Hope keeps humanity alive. After tasting minor success, major success must be around the corner! So onwards I went. In the only direction I know: forward.

Those who don't believe in an Omniscient Power should enlist as soldiers to fight in the latest global war. (There are no atheists in trenches.) If the thought of death in uniform doesn't quite take your fancy, then the next best thing is a walk around the deserted streets of Ayutthuya with neither an online nor a paper map. Either experience is enough to make a person believer!

Then providence smiled for me once more.

I saw another, this time more imposing, pagoda like structure in the distance! Again, my choice was clear: forward, forward towards the pagoda.

As I got closer to the site I noticed a few visitors milling around the area. There were ruins spread out over a large area. The main structure was undergoing restoration. I was encouraged by the sight of a ticket office collecting an entrance fee from all visitors. The ticketing booth was a sign I was getting closer to the main event.

I paid my fee, went inside and explored. The overcast lighting was not supportive for photography but I went crazy anyway. This might be the best set of ruins I come across today. So I explored every ruin, pagoda, broken Buddha sculpture and anything else I could find at the site.

At the time I was unaware this site was Wat Ratchaburana, one of Ayutthaya's main Buddhist temples. After I climbed atop the main structure I observed multiple pagoda and stupa like structures to my left. My 'go it alone and leave the tuk tuk behind' decision was being vindicated with each passing minute! 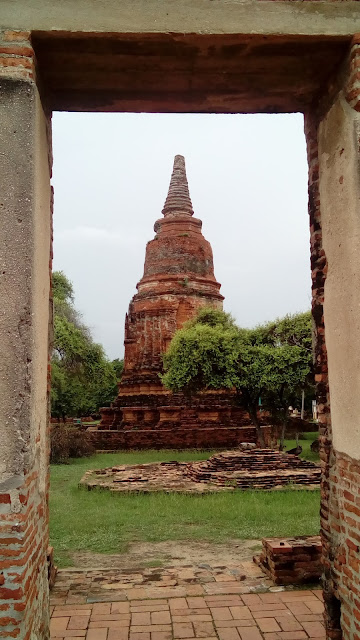 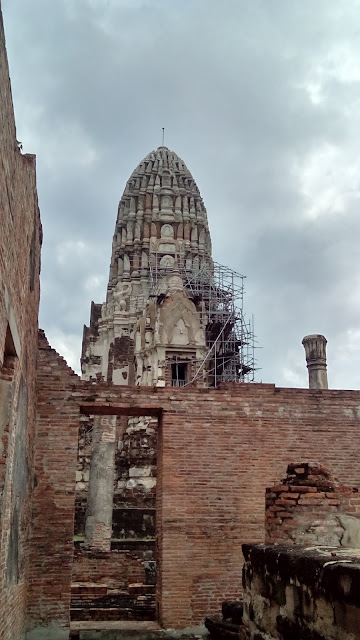 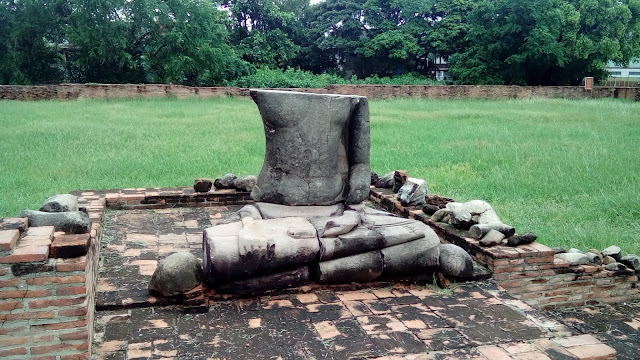 After completing my methodical review of Wat Ratchaburana, I scurried across the road to the area of the multiple pagodas. It was an enclosed location and I couldn't find the entrance. There weren't many people around.

Success comes to those who sweat (and walk the lonely road)!

After walking a little farther the whole world suddenly seemed to open. There were tourist buses, traders manning little stalls and tourists everywhere.

This has to be the place. The average tourist is not bussed to any old historical attraction – only significant ones. Tourists are on a busy schedule, taking 'selfies' at multiple locations requires using time efficiently!

I bought my entrance ticket and proceeded inside.

The temples were amazing. Surely, Ayutthaya's temples will give Angkor Wat a run for its money. (I recently learned Angkor Wat once was part of the Siamese Empire and, in case Cambodians forget the fact, there exists a scale model of Angkor's temple complex inside the Bangkok palace.) 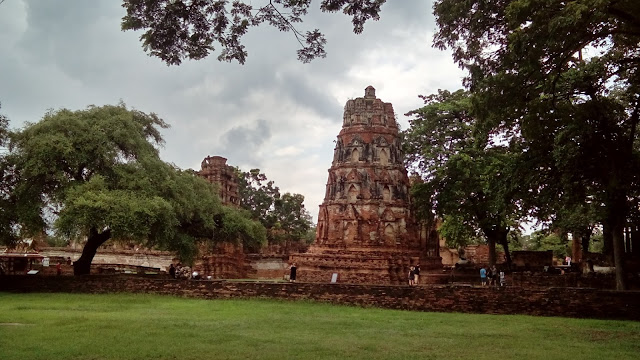 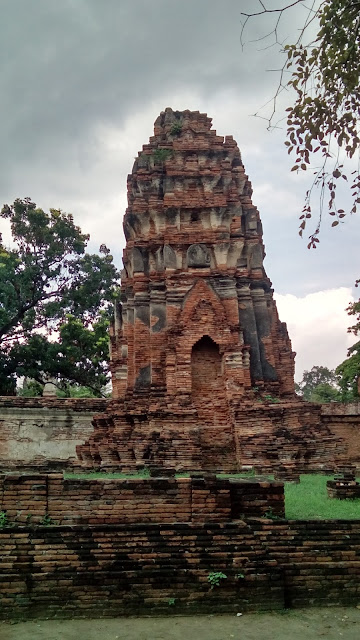 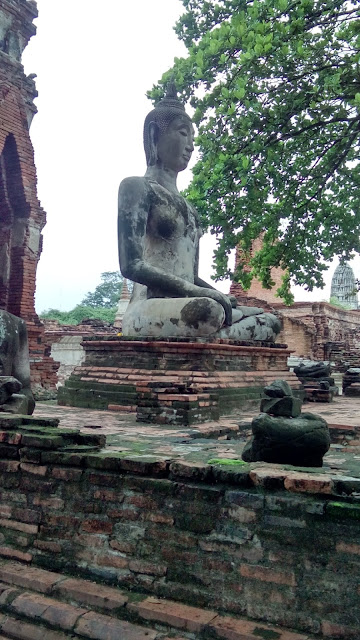 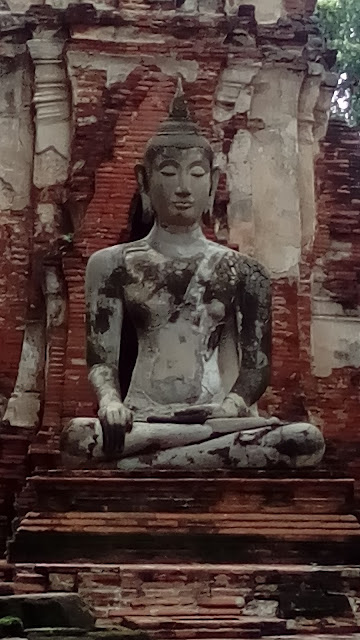 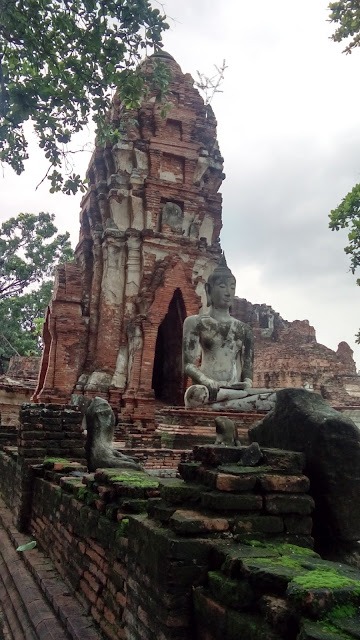 A short while later, I found myself staring at the famous 'Buddha Head in Tree Roots' and several other 'vintage' Ayutthaya structures. It is easy to understand why the ruins enclosed inside the Ayutthaya Historical Park were designated a UNESCO World Heritage Site in 1991. 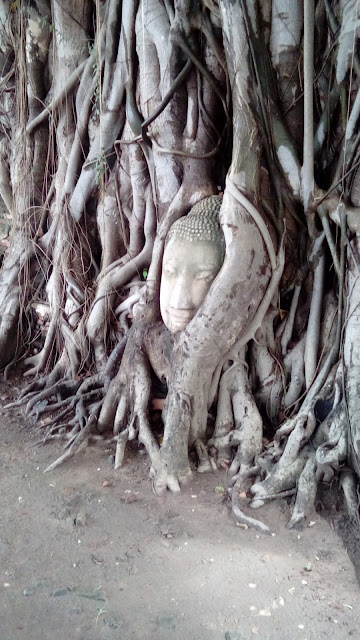 By the time I started my walk back to the railway station I was a content traveler.

At the railway station I bought my ticket and waited for the train. Only this time I decided to travel in a non-air conditioned, third class carriage without a reserved seat.  After my success in navigating Ayutthaya, traveling 'like a local' seemed the most fitting way to cap my day.

I was not mistaken. 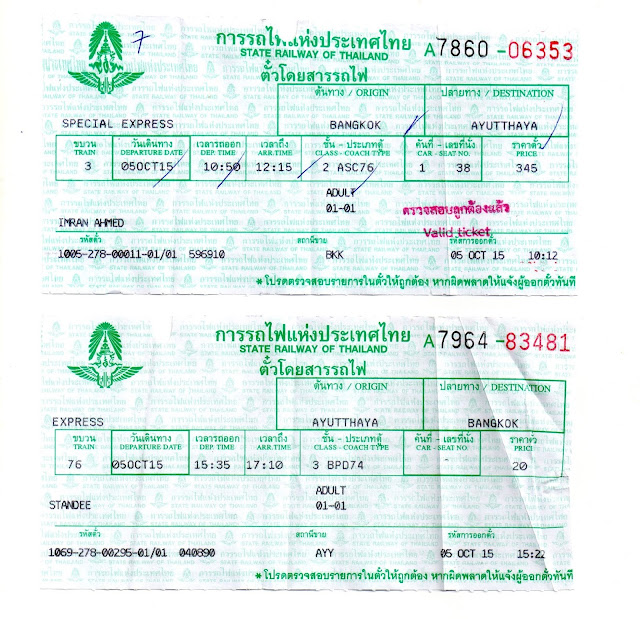 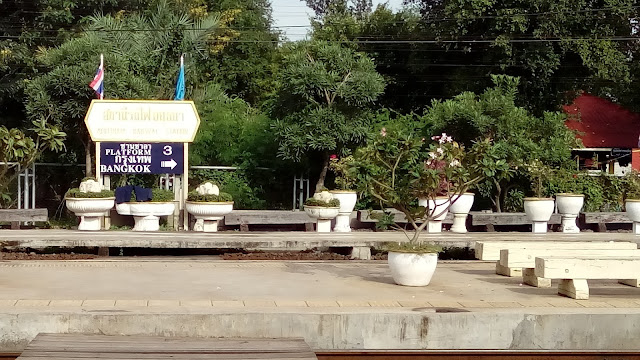 Once the train pulled into Ayutthaya Station I scrambled aboard the Third Class carriage. It was not easy finding a seat but I squeezed onto one across from a Thai gentleman who epitomized an ageing rock star of yesteryear. He had the tattoos and pony tail to prove it. On the other side of the aisle was a mother with her young five-six year old daughter.

The rest of the carriage was crammed with all variety of goods and people. One woman seemed to be travelling to Bangkok with enough items to fill up an entire shop. (I suspect she was traveling to the big city to do exactly that, i.e. set up shop.) Occasionally, a man or woman would walk through the carriage offering food for sale. The carriage was a veritable Thai village on wheels!

Over the course of the ninety minute journey I got a few nice smiles from the little girl across the aisle – enough to liven up an otherwise lethargic journey. Though I didn't have the nerve to ask the rock star for his autograph!

Despite the poor light conditions for photography, my Ayutthaya experience was thoroughly enjoyable. A return visit is definitely on the cards. Although on my next visit I may hire a bicycle to help me move around. The roads are not busy and the city is compact enough to conveniently cycle between the main sights.

For visitors to Bangkok, Ayutthaya is an easy and convenient day trip out of the city's urban sprawl. Taken holistically, Ayutthaya is a worthwhile escape especially as it gives a glimpse into 'non-Bangkok' Thailand. Bangkok is another country altogether ….
__________________
Imran is a Singapore based Tour Guide with a special interest in arts and history. Imran has lived and worked in several countries in his career as an international banker. He enjoys traveling, especially by train, to feed his curiosity about the world and nurture his interest in photography. Imran can be contacted at imran.ahmed.sg@gmail.com. Follow Imran on twitter at @grandmoofti and Instragram at imranahmedsg.