Two years ago I published a post (reproduced below) suggesting financial transparency for charities like the City Harvest Church (CHC) must be improved. Unfortunately, it seems my concerns were warranted.

Recently, several senior members of CHC, including founder Kong Hee, have been arrested by Singapore's authorities on charges of misusing CHC funds to promote the singing career of Kong Hee's wife (Sun Ho).


"The COC's Inquiry revealed misconduct and mismanagement in the administration of the Charity, particularly in relation to the funds that were in the Building Fund which had been raised and earmarked for specific purposes. Financial irregularities of at least $23 million from the Charity's funds have been discovered. These funds were used with the purported intention to finance Ho Yeow Sun's secular music career to connect with people. There was a concerted effort to conceal this movement of funds from its stakeholders." (COC Statement.) 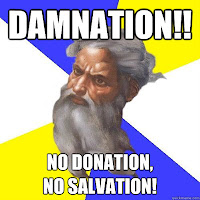 I am encouraged by the Singaporean authorities desire to make the management of CHC charity accountable for their alleged breach of public trust. In the event that wrongdoing is established, it is essential that exemplary punishments be handed out to those responsible for the serious misdeeds.
I await the legal proceedings with baited breath!
______________________


I am not surprised that the City Harvest Church (CHC) saga is back in the news. Modern religious leaders who combine worldly enterprises with spiritual undertakings always raise my suspicions.
Singaporeans should be glad that the authorities are investigating possible misuse of funds by the church and some of its leaders. If CHC has nothing to hide then the investigation becomes a routine affair. On the other hand, if wrong doing is uncovered then the government must send a clear signal to all charities that the exploitation of public trust is a serious offense.
No doubt, all religious undertakings must have worldly trappings to survive: places of worship, salaries for staff and so on. But it is hard for me to believe that a church which commits SGD 2.9 million towards charitable work on donations of SGD 86 million is fully committed to its community roots. CHC spent more on 'Christian Television Broadcast and Mass Media, Church Television Ministry and Internet Broadcasting' in 2008 - 2009.
There are two issues that demand further analysis: the scope of allowable relationships between non-profit entities and allied profit making entities, and the moral problem regarding the involvement of a 'spiritual' leader in business enterprises.
The CHC is involved in several business transactions, including the purchase of Suntec City. The Suntec transaction brings up many questions.
Clearly, many questions about CHC's activities remain unanswered. Only a thorough investigation will satisfy a public legitimately hungry for answers.
I hope the Singapore authorities will not only be transparent with their findings but also act on them. If changes to regulations governing religiously inspired organizations are necessary, they must be made urgently.
The moral issues raised by the CHC episode are more personal in nature.
I do not believe that a man of religion should be so blatantly involved in commercial enterprises. Yes, devoting one's life to religion does not automatically mean leading a monk's life but accumulating (and not spending) excessive wealth also raises serious questions about the person's commitment to social welfare.
Does seeking out profits for commercial purposes – managing television stations or buying convention centres – falls in the realm of legitimate CHC activity? Now, if the CHC were managing shelters for the homeless or providing social welfare services then few will question the legitimacy of the CHC.
As things stand, there are hardly any positive signs of CHC activities visible to the ordinary Singaporean. People are right to be sceptical.
The issues are complex and require an independent and empowered commission to make recommendations for strengthening legislation surrounding non-profit entities. If harsh measures, including the forfeiture of illegally obtained assets, are implemented few will be sympathetic towards lawbreakers.
A review of the rules is no longer optional, it is a requirement.
If I were a contributing member of the CHC, I would certainly want to know whether my money is used to fund the Reverend's lifestyle or the CHC's legitimate activities.
Article originally published on June 9, 2010
__________________


Imran is a business and management consultant. Through his work at Deodar Advisors and the Deodar Diagnostic, Imran improves profits of businesses operating in Singapore and the region. He can be reached at imran@deodaradvisors.com.
Posted by Imran Ahmed at 17:01